Following your child’s interests can unlock a range of learning opportunities, this article uses fire as an example.

The Great Fire of London

In this particular case, we ended up looking at the Great Fire of London because my 9 year old son loves fire and burning things! To start any topic/project/line of inquiry I always ask the children what they know already and I am often surprised at the answers… its good to capture this pre-existing knowledge as a baseline. We then brainstorm what we would actually like to find out – this is the crucial bit – they often say some interesting things like, “I don’t think they had fire brigades so how did they put the fire out?” 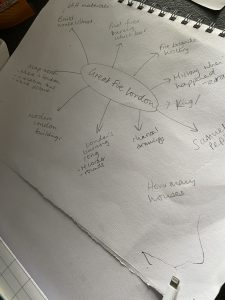 After brainstorming all our ideas and questions we start with some research and then run through our ideas. We keep a record of this on the Collage app.

Things don’t always follow in a logical order as the children get quite excited and we sometimes divert from the plan. This is ok and far better that they explore their natural curiosity, not suppressing their thoughts, with this freedom often leading to new discoveries, innovations and child-led problem solving.

So, below is a list of what we covered on this topic.

We asked the following questions and researched them on the internet.

When was the fire?

How did it start?

How did they put it out?

Why did it burn for so long?

Who started the fire?

What changed as a result of the fire?

When was 1666? I linked this to reading and ordering numbers on a number line. Interestingly, this developed into a session on negative numbers, but all good learning though…

My 7 year old daughter didn’t know where London was exactly so we looked at maps of London in the past and now, we discussed how they look different to today’s maps and why. We then looked at where London is in relation to where we live. Then we studied maps of the UK to establish London as the capital but also to re-enforce England, Scotland, Ireland and Wales.

We watched videos of historians talking about the fire and we looked at drawings of the shops/houses. We discussed whether they look different or the same as houses we see today. We talked about building design and materials and compared them to modern day. This is where we veered off to look at what they did before fire engines…

We then designed and made buildings out of cardboard and talked about the style of shops and how shopkeepers mainly lived above their shops. My daughter wanted to make a house with cob style walls so she mixed some straw and clay to see what would happen. My son made some of the tools that they used to try and put the fire out and we then went on to re-enact the fire by burning our ‘Pudding Lane’ outside! 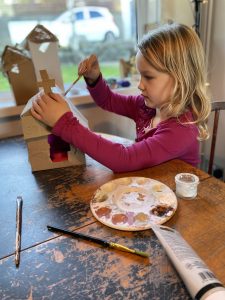 The children were interested in what the houses were made of and we set up an experiment to see which material burned fastest out of wood, cardboard, straw, stone and brick. We also looked at how fast alcohol and oil burnt as they were in the nearby shops at the time. We created a chart to record our findings, we hypothesised what we thought would happen and then we burnt each one individually. 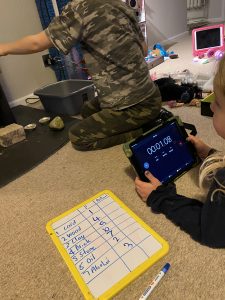 The diary of Samuel Peps provided a lovely opportunity to create our own diaries, just for a week to record our thoughts and events of the day.

We had great fun trying to learn London’s Burning, a nursery rhyme derived from the Great Fire of London. We learnt it on the recorder and also sang it as a family and attempted to sing it in a round!

What would you do if there was a fire in our house? We watched a fire safety video by the London Fire Brigade and role played what we would do if we were in a fire. We pretended to make a call to the fire brigade, practising our address and phone number.

I had planned a couple of other things but let them slide when their own interests took over: